A Lifestyle of the Loudest 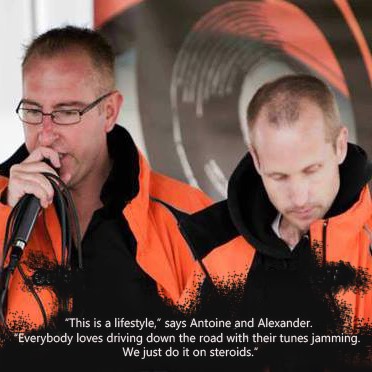 The scene: Santa Pod Raceway in Podington, Bedfordshire, England.
Some of the flashiest cars you’ll ever see are lining up in lanes at one of the world’s greatest drag-racing tracks, preparing to race to the finish. But the drivers and spectators don’t care who crosses the finish line first. This competition isn’t about who’s the fastest — it’s about who’s the loudest.

A Lifestyle of the Loudest
Welcome to the strange, wonderful world of car audio competitions. These uniquely modern sports events attract over 10,000 competitors every year, all competing to build the world’s loudest car. Ultimate Street Car (UCS), a custom car show and music festival held at Santa Pod Speedway, includes the biggest car audio battleground on the planet, bringing in amateurs and professionals from across the UK and beyond. There are also contests with a different feeling, like PropperDroppers, which started in 2006 due to a briljant idea of the Englishman Marcos Barnes.
“This is a lifestyle,” says Antoine Klerks, president of the nearby Dutch PropperDroppers division. “Everybody loves driving down the road with their tunes jamming. We just do it on steroids.“

The best thing about the competitive car audio scene is that it’s wide open to amateurs. Any starry-eyed amateur with a car, a 1000-watt amp, and a dream can show up to an event and blow away the competition in his class. If tinkering with your car’s stereo until it plays ACDC’s “Shoot To Thrill” loud enough to blow out windows at the other side of our planet sounds like your idea of a fun weekend, here’s everything you need to know about getting started in competitive car audio.

Car Audio Associations
First time car audio competitors are often overwhelmed by the alphabet soup of different associations, but in truth, most of them are very similar. Don’t worry too much about the difference between PD, dBDRA and EMMA’s ESPL — any one will do, as long as they have the format or formats you want to compete in. To get invited to championships at the end of the season, you’ll need to rack up a large number of points in some occasions. So if you’re dreaming of being named the loudest of the loud, pick whichever association has the most events in your area, so you can win as many points as possible.

There are a few popular types of car audio competitions that almost every association hosts, along with a couple of more idiosyncratic formats specific to individual groups. Here are the ones you need to know about.
Sound Pressure Level (SPL) is a competition to see who can make the loudest sound with their vehicle’s audio system. SPL is the 100-meter dash of competitive car audio — sheer decibels are the only thing that matters here. It comes in two basic flavors: tone burst and street music.

Tone Burst vs. Street Music
Tone Burst competitions use a test sound called a “burp” to achieve towering volumes. The highest dB level you can burp at is your final score. Without the variability of music, tone bursts contests are almost entirely technical. The division for engineers and perfectionists.
Street Music competitions let you bring any widely available music to the table (i.e. no creating your own music so you can optimize your system around it). Competitors play their songs for a set period of time. Whoever maintains the highest dB average wins.
Sound Quality (SQ) is the other side of the coin from SPL. SQ competitions are judged by professionals, who sit in your vehicle and listen while taking notes. The objective is to create a soundscape in your vehicle that gets as close to live quality as possible. As you might expect, SQ and SPL competitors don’t always get along.
Demo Contests sit somewhere between SPL and SQ. Demo competitors put on a concert out of their cars while being judged on a wide range of criteria.
Bass Race is unique to dBDRA events. It’s a musical average competition that uses “The Price is Right” rules: name your decibel class, then get your average as close to it as possible without overshooting.

Competition Classes
Once you’ve picked an association and event, the next step is to determine what class you want to compete in. Like in any sport, classes are delineated so participants of all skill levels can face healthy competition. Each association has different classes, but they all tend to break down along the same lines. If all you have is a few aftermarket amps in an unmodded car, you’ll be in a novice bracket. One class will be the highest limit for stock, driveable builds. From then on, the rigs get more powerful and the cars more ludicrous, until classes like PropperDroppers Extreme Division feature mobile concert amps that happen to have resembled cars at one point.

Equipment
The equipment you’ll need to bring to your first competition depends heavily on what events and classes you choose to compete in. At the bare minimum, though, this is what you should have in your car before you think about competing;

Amplifiers
Showing up to a car audio contest without amps is like showing up to play baseball without a bat, glove, or shoes. When buying an amp, look for power if you’re going in the SPL direction, and quality if you’re more into SQ. In both cases, make sure the impedance on the amp matches that of the speaker or head unit.

Subwoofers
To get the best volume, you need to boost your lower frequencies. Get subwoofers and attach them to amps with similar impedance. If you’re competing for volume, find a sub with a ported enclosure; if you’re after quality, go with sealed.

Car Battery
Your entire sound system is running off your car’s battery, so it’s a good idea to replace your factory model with one that can handle your upgraded sound system.

Cables: To get the most power out of their batteries, SPL competitors often hook up multiple 0g cables. This also prevents your amps from burning out due to low power input.

Fuses: Most events require these as a safety feature. Even if they don’t, be sensible — you don’t get any points for setting your car on fire or winding up in the hospital.

Head unit: The most important thing here is that it be remote-controlled and that the remote pause/play has as short a delay as possible. You’ll also need enough RCA outputs for your subs and amps. Alpine, Pioneer are good brands, but as long as it meets the minimum threshold, there’s no need to spend beyond your means.

What Are the Winners Using?
When shopping for your competition equipment, start by seeing what the previous year’s winners used in your competition format. You aren’t guaranteed to win just because you have the same loadout, but it’s a great starting point.
Also, talk to other enthusiasts, other competitors, and people who have bought the equipment you have your eye on. Making friends will get you everywhere in competitive car audio.

Your First Event:
You’re not going to win. Not even your division. We’ve all fantasized about being the unknown challenger who comes out of nowhere and blows the veterans out of the water, but this isn’t a Hollywood movie (although a movie about competitive car audio could be awesome, but now we’re getting off track).
The point is that before you win, you’ve got to learn how to compete. Use these tips to get the most out of your first event.
Be respectful. This is not the scene for grandstanding or trash-talking. Whether pros or newbies, everyone at a car audio event is nice to people who are nice to them. Always congratulate your competitors whether you won or lost. Move around safely. Out of necessity, there are a lot of cars moving through pedestrian areas on their way to and from events. If you’re walking, keep an eye out for cars. If you’re behind the wheel, drive slowly and carefully. Know the rules. Contest managers are happy to help you out if you’re confused about something, but you shouldn’t waste everyone’s time by showing up totally unprepared. Do the reading and you’ll get along fine. Watch the winners. The winning competitors in every division share certain habits you can learn a lot from. For example, whenever they’re not competing, they’re usually recharging their batteries. In music divisions, they don’t start their chosen songs at the beginning, and they never crank up their radios to show off between runs. Noticing things like this can take you a long way. Don’t be dramatic. Remember how we said this isn’t the place to grandstand? There’s no reason to wait until the last ten seconds to try and hit your high score. Go for your final score as early as possible — that way, if anything goes wrong, you might have time to fix it. Talk to people. The best way to start conversations at a car audio event is to ask for help. Most competitors love going over other people’s rigs and offering advice. You can learn things, make friends, and improve your setup, all at the same time. Have fun. Most car audio contests don’t have cash prizes. As Antoine earlier said, it’s a lifestyle. Don’t get so hung up on tuning and decibels that you forget to enjoy yourself!

Next Steps;
If you find yourself bitten by the bug at your first competition, it’s time to think about how you can improve. The sad truth is that no matter what competition format you choose, the easiest way to get better will be to spend more money on equipment. Going up a class requires bigger amps, bigger subs, a more powerful battery, more wiring, and maybe drastically remodeling your car.

Insider Tips for Competing on a Budget;
However, competitive car audio is not completely out of reach to those of us on tighter budgets. Here are a few ways you can achieve better or louder sound without forking over a huge amount of cash.
Install sound-deadening material in your car. A lot of volume vanishes into your car’s door and floor panels. Installing sound-dampening mats is a lot cheaper than buying more amps, and can get you great results.
Relocate your speakers. Load up your favorite mix CD and spend some time experimenting with putting your speakers in different parts of your car. Try everywhere: the doors, the backseat, the trunk, the roof. You never know just where your sweet spot will turn out to be!
Use a TermLab meter. TermLab is the official competition meter for most associations. You can buy one, rent one, or borrow one. Use your TermLab to test what frequency gives your sound system the greatest volume. If you’re in music SPL, pick a song that’s mostly in that register. If you’re in tone SPL, it’s even easier, since you only need to play one note.
Get a battery charger. If, during your first competition, you find yourself losing dB between each run, it might be because of the strain on your car’s battery. Battery chargers are the antidote. You can get one without breaking the bank.
Disconnect your full-range speakers. Full-range speakers don’t help you get any louder, and if they’re still hooked up, they’re draining power your other speakers need.

Conclusion
There’s no sport in the world quite like competitive car audio. You’re not even halfway to understanding the atmosphere at the biggest events. Yeah, it’s an expensive hobby, which can make the scene feel unwelcoming at first — but we guarantee that the experiences you have will make it all worth it. And there’s nothing quite like the high you get when, just for a second, you were the loudest guy at Santa Pod.

Good luck, and we’ll see you on the lanes!

<< Go back to the previous page